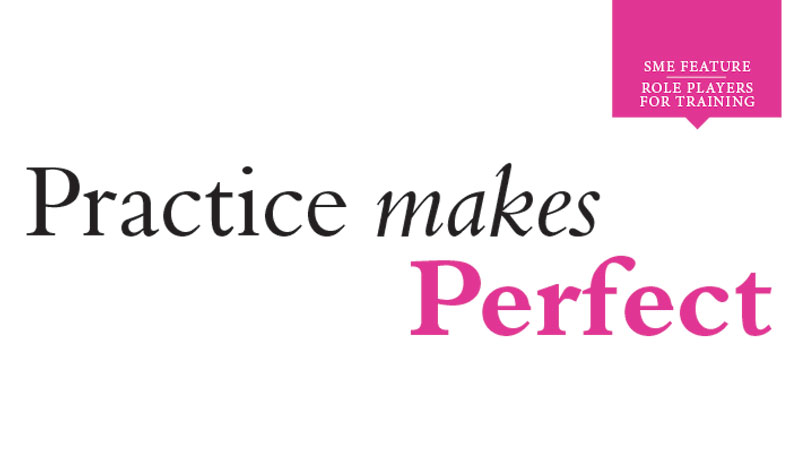 Widely used in the US and UK, role playing for business training has a much smaller presence in the Irish market. Rita Smyth of Role Players for Training established her company to meet demand in Ireland and she tells Sarah Kavanagh how her approach can motivate and educate employees through using Role Play in Learning and Development.

“The theory behind role play in learning and development, is the opportunity to practise new interpersonal skills - such as dealing with difficult conversations - and other ‘soft skills’ in a safe and encouraging environment. There are lots of very, very talented people coming out of universities in terms of the level of technical skills and degrees, but an area that seems to be missing are those communication skills – the ability to have a good conversation with somebody and to get past the interview stage.” - Rita Smyth, Founder, Role Players for Training

Realising that demand for a similar service was not being met in her home country, Smyth established Role Players for Training in 2011. “Role playing companies are very common in the UK, whereas they are not so here in Ireland, and that is where I was initially introduced to the concept of using drama-based skills in business and education,” she says. “In 2011, I decided that I had gained considerable experience and skills and, combined with my previous career, I felt that I had a really good offering to bring to the Irish marketplace where, to be honest, there wasn’t a huge amount of this type of work being done.”

Role Playing for Training offer organisations and their staff – from trainees to senior management – the opportunity to practice a work- related situation with their team of professional actors. “You can read a book on how to drive a car, bake a cake or fly a plane, but you can’t do it unless you actually practise it,” says Smyth. “The theory behind role playing is that you get the opportunity to practise new interpersonal skills – such as dealing with difficult conversations – and other ‘soft skills’ in a safe and encouraging environment.”

Practise sessions range from one- on-one exercises to forum theatre style scenarios where professional actors play out a scene and the audience can provide feedback. “The participants will interact with the role players and direct them in how to do whatever it is they are doing in a more effective way,” says Smyth. “They direct the action from a safe place – which is their comfortable seat in the audience – so they don’t feel under any pressure in terms of actually performing in front of a group.”

One-on-one exercises can be scripted or improvised depending on the scenario and provide an opportunity for participants to receive feedback themselves, an element which Smyth believes to be the most valuable part of the process. “we find increasingly that there is a difficulty in giving negative feedback or bad news,” she says. “They tend not to do it in a very good way and that usually ends up in the meeting not being very productive, positive, or encouraging. We, the corporate role player, will give feedback to the participant and we would also give it out of role and facilitate feedback from observers in the group. They learn from the observers, they learn from the feedback they get from us and they also learn a huge amount about themselves, often saying ‘gosh, this is how I felt when I was in that situation and if I had to do it again I’d do it differently’.”

However, this form of role-play training is only one facet of the business. Professional role players are utilised in other areas such as assessment centres for executive and graduate recruitment. “In very senior executive recruitment they have what is called an assessment centre where candidates are actually put through a simulated meeting with other parties and we would take on those roles,” says Smyth.

The company also work with executive education institutions, such as UCD Smurfit Graduate Business School, and provide training to the leaders of tomorrow. “we think it’s really relevant for that sector as they endeavour to hone their communication and influencing skills,” Smyth says. “There are lots of very, very talented people coming out of universities in terms of the level of technical skills and the degrees that they have but an area that seems to be missing are those communication skills – the ability to have a good conversation with somebody and to get past the interview stage.” In addition, they have provided the School of Pharmacy at RCSI and the Royal College of Physicians with professional role players to act as simulated patients for postgraduate and certification examinations.

While all of the role players at Role Players for Training are professionally trained as actors, Smyth believes an important distinction is that they also possess real business skills, training and experience too. “The people who work with me have come from various backgrounds,” she says. “IT, banking and teaching combined with experience working as role players in financial services, pharmaceutical, management consultancy and executive education. we’ve got a whole spectrum of real work experience behind us so we’re not coming in just as actors who have just come out of drama school.” However, Smyth does not discount the importance of professional acting qualifications among her staff. “We have training around consistency, improvisation, repetition, and emotional responses that are natural,” she says. “In a difficult role play we will respond very naturally to what’s coming across at us as we have been trained in how to deal with such situations. Consistency is vital so that every candidate has equal opportunity to succeed.”